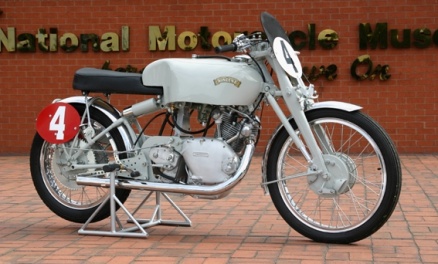 The Grey Flash was not a big seller, about 30 were made in some ways its creation was a reaction to the wholesale lowering of capacity limits in racing to 500cc after the war. It utilised many of the engine components of the Black Lightning and many ‘Flash’ motors were produced for use in 500cc racing cars not bikes. John Surtees is often cited as starting his racing career on a Flash but the truth is, he started with a very second hand development Comet, a factory hack that had helped in the development of the Flash a year or so earlier and as he made it into a winning machine it also owed a lot to Johns engineering ability. Modification for racing, the fact there were only 30 real ones and a factory ready to make what the customer demanded (there were even some road equipped flashes) means that a ‘standard’ flash is a difficult animal to capture. The only available gearbox with a choice of ratios was the Albion box (anyone who has tried to race with a standard Burman knows the reason why). This different gearbox dictated some altered transmission components and engine plates etc. there was also a BTH TT magneto and a TT carb but generally either lightened Comet parts or Lightning parts were used. The castings were left in a dull state it is said that the Show models employed some grey anodised aluminium and a little more chrome than the production bikes even the shade of grey-green paint is subject to discussion. In these circumstances when building a replica one can only take best advice and bear in mind modern needs and tyres.

We will be updating this page as the project progresses, as well as the Grey Flash Diary in our blog.

Copyright © 2015 Oldracer all rights reserved. - In association with BSK SpeedWorks