The Egli Vincent The Snarling Beast 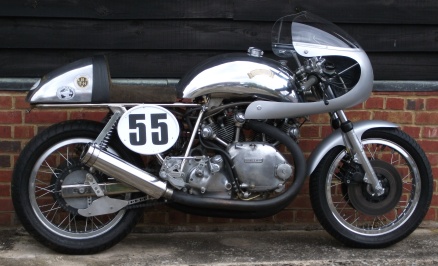 Our Egli Vincent was developed in 2007 to compete in the British Historic Racing Club up-to-1972 Unlimited Class. It was in this class that the Egli-Vincent enjoyed great success for the years 2008, 2009 and 2010, Ben often winning all four races entered during a two-day meeting, and was frequently the subject of reports and articles in the motorcycling press. Its complete race record out of 42 starts includes 12 wins, eight 2nd places and seven 3rd places plus numerous other top-ten finishes..

The Egli was originally purchased in 1989 as a road bike and later converted to a Comet racer. The original road frame has been replaced with a later CTS racing type, while the drum brakes have been replaced with Brembo discs of a type available in 1972. Forks are Marzocchi and a special Egli fuel tank has been made by Colin Taylor to increase capacity while improving compactness.The engine was built in 2007 using new John Wyatt cases prepared by renowned marque specialists Maughan & Sons. The cases contain a 100mm-stroke bob-weight crankshaft, which combined with the 90mm bore gives a capacity of 1,272cc. Special pistons from Venolia are used and during its rebuild for the 2010 season Carrillo rods were fitted that are 5mm shorter than standard, bringing the engine height closer to the original.

Special cams and valves are employed and ignition is provided by a BTH electronic magneto feeding twin-plug cylinder heads. Primary transmission is by a Bob Newby 40mm belt and clutch to the Surtees/Quaife five-speed gearbox. The exhaust system was specially made for the engine; the 2" pipes are by Nick Paravani (Competition Fabrications) and the final development exhaust boxes were custom made by NRP, giving an under the statutory 105Db reading on noise test. In keeping with the 1972 specification, the carburettors are 34mm Amal Mk2 Concentrics. Maximum power is estimated at 80-90bhp.

For the full story behind this bike see our article here We have unfortunately recently sold this bike to fund some of the other projects you can find on this site and to help pay to keep us racing.

Copyright © 2015 Oldracer all rights reserved. - In association with BSK SpeedWorks